Frecon Farms has been growing some of Pennsylvania's finest tree fruits and berries since 1944. Cherries, peaches, plums, blueberries, nectarines, raspberries, apples, and pears. For 3 generations we've proudly serviced retailers, schools, and institutions with select tree fruits from our family orchard.

Black Pearl | Mid to End of May
BlackPearl® is an early cherry with exceptional firmness and storability, ripening 8 to 10 days before Bing, with Chelan™. This large cherry is firm and crunchy with excellent flavor, 20% sugar and a low incidence of cracking.

Ebony Pearl |
Ebony Pearl(NY 32) has remarkable size. Ebony Pearl is an eye-pleasing, mid-season cherry that ripens 1 to 3 days before Bing. The fruit is dark red with good flavor and 21% sugar.

Chelan | Mid May
The medium-sized Chelan™ cherry is tasty when picked at its best tart flavor. Ripening 11 to 14 days ahead of Bing, Chelan™ is firm and attractive with mahogany red skin and medium to dark red flesh.

Dapple Dandy | Late July to Mid August
Sold in stores as “Dinosaur Egg®,” the large, firm Dapple Dandy Pluot® interspecific plum has a distinctive skin color that is pale green to yellow with red mottling. By traditional standards, the skin is unattractive, a fact that will be quickly forgotten after one taste of the creamy pink flesh. Dapple Dandy offers a spicy, plum-apricot flavor and a good acid to sugar balance (17 ºBrix).

Flavor Queen | Mid July to Mid August
Flavor Queen Pluot® harvests in August when the fruit begins to turn from green to bright yellow. This Pluot® is one of the sweetest of all Pluot® varieties, but cannot be sold to retail stores due to a skin so tender the fruit must be harvested with gloves. The large fruit is light-green to yellow, with golden flesh that is firm and juicy. Flavor Queen Pluot® is sweet with a slight apricot aftertaste and little tartness (18 ºBrix).

Ruby Queen | Mid July to Mid August
Beautiful reddish-black skinned fruits are 2″ around with firm, red flesh and an outstanding flavor. Ruby Queen is a USDA introduction that ripens 3-4 weeks after Plum Santa Rosa and is the plum of choice to extend the harvest season.

Spring Satin Plumcot | Early July
Apricot meets plum. This unique cross produces plumcots with red-black skin and golden red flesh that is very sweet: 33% sugar. Fruit is larger and firmer than other varieties of its kind.

Draper | Late July
The Draper is an early midseason variety boasting large, powder blue, firm, excellently flavored berries. With delicious flavor and excellent firmness, the fruit is unusually regular and is presented in a loose cluster; easy release of ripe fruit from loose clusters and bears fruit on a strong, small stature bush.

Bluecrop | July
A great blueberry plant for colder climates. Produces big clusters of large, all-purpose berries — perfect in salads or pies, or served with cream. Developed in 1934, introduced in 1941. Cold-hardy. Ripens in July.

Gloria | Mid to End of July
The Gloria™ peach offers a unique combination of qualities; it is exceptionally attractive and extremely firm, with a sweet, low-acid flavor. The fruit is large, highly colored (60 to 90% scarlet red over orange-yellow), with bright orange freestone flesh.

GaLa | Mid July
One of the earliest-ripening peaches. As attractive as it is flavorful. The fruit’s firm texture and minimal fuzz make it perfect for fresh eating and canning. Kids love it, too!

Rich May | Mid May to EarlyJune
Rich May is a yellow-fleshed clingstone peach with better flavor than other May-ripening selections. The Rich May produces large fruit with high color (85% to 90% deep red over yellow).

Desiree | Mid May to EarlyJune
Highly colored and firm to very firm with good flavor, Desiree™ peach is attracting attention in the early season. Desiree™ is a medium-sized, yellow-fleshed cling to semi-freestone. The skin color is 70 to 90% crimson red over yellowish-red.

Bounty | Mid July
Enjoy a mid-July ripening peach that has excellent flavor. This yellow fleshed freestone is nonbrowning, making it an excellent choice for canning.

Victoria | Early to Late August
Victoria™ is a large, firm to very firm late season freestone peach with excellent flavor and good shelf life. The skin is bright yellow blushed with red, the flesh is yellow. Harvest is about four weeks after Cresthaven.

Spring Snow | Late May to Mid June
The largest of the May white peaches, Spring Snow is a low-acid white clingstone with very good flavor. The tree yields large fruit with high color (80% red blush over white).

Sugar May | Mid June
Sugar May is a white-fleshed freestone peach with excellent eating qualities. Very juicy and sweet, it has a well-balanced flavor that earns high fruit-tasting scores. With medium-to-large size and attractive red skin, Sugar May is an excellent choice for the early season peach market.

Manon | Early Season
This white semi-freestone peach is large and firm with a red skin. The flesh is smooth and sweet excellent for fresh eating with low-acid flavor. Attains great size for an early season variety.

Jade | Early Season
An early-season white nectarine with excellent color and firmness. The fruit is medium in size and freestone with very good eating qualities.

Bosc | Late Season
Long and narrow shape, brown skin. Superb quality, one of the best. Use fresh or cooked.

Harrow Sweet | Late Season
A late-season pear developed by the Harrow Research Station in Ontario, Canada, AC™ Harrow Sweet ripens approximately three weeks after Bartlett.  The fruit size and appearance are similar to that of Bartlett; however, AC™ Harrow Sweet does develop an attractive blush.

Anjou | Late September
Also commonly referred to as D’Anjou, this pear is still tasty seven months later and hits all the right notes. It’s cold-hardy, vigorous and precocious… and its keeping quality is unparalleled at up to seven months. Bright green and very firm at harvest, with a tinge of yellow as it ripens. Subtly sweet, fine-textured flesh. Introduced to America in 1842.

Golden Delicious | Early to Late September
Long-time favorite for its sweetness and flavor.

Snapp Staymen | October
A sport of Red Stayman 201, this strain was discovered in the orchards of Alfred Snapp of Winchester, Virginia. We are confident that Snapp™ Stayman is the most highly colored strain of Stayman available. Productivity and flesh quality are identical to Red Stayman 201.

Blushing Golden | Mid October
It tastes great and it keeps well. It has the smooth Golden Delicious flavor, with a bit more zip. And it keeps in cold storage for months. Amazing! You can pick them in late fall (October) and still be eating them come spring.

Paula Red | September to Mid October
Bright red with some yellow and tan spots; the skin often has a dusty sheen. They have a sprightly taste, not too sweet and not too tart. It has a firm white flesh that becomes soft and mealy extremely quickly as its season declines. Paula Red apples are suitable for both eating fresh and cooking, although they become extremely soft when cooked, which suits them to some dishes (applesauce) and not others (pies).

EverCrisp | Mid to Late October
The EverCrisp Apple is a new apple tree developed and released in 2012 by the Midwest Apple Improvement Association after more than a decade of careful cross-breeding. EverCrisp, a cross of Fuji and Honeycrisp, has a sweet flavor. It’s closer to Fuji in resemblance, but shares some of Honeycrisp’s texture characteristics.

Ginger Gold | Mid to Late September
Enjoy apples in summer! This early picker allows you to enjoy apples sooner than most varieties. The juicy and delicious fruit features a yellow-green skin with a golden glow. A crisp crunch and mildly tart flavor makes them perfect for fresh eating.

Cameo | Late October
Cameo apples are beloved by many PA cooks because they hold their shape and look fantastic when plated. They add crispness to salads and other dishes. Take a bite of a Cameo apple when you’re craving a snack that’s low in fat but high in fiber and flavor! Kids especially enjoy Cameo apples because of their sweetness and crunch.

Gold Rush | Mid to Late October
This apple has a tart, tangy flavor that sweetens with age. Excellent fresh or in pies and crisps.

Virginia Winesap | Late October
Virginia Winesap are medium-sized, somewhat heart-shaped apples with deep red skin.  Inside, they have firm, crisp white flesh, which is aromatic with a spicy flavour.

Ashmead’s Kernel | Early to Late September
Widely regarded as one of the all-time best-flavored apples.  Small to medium-sized fruit variable shape, often lop-sided.  Greenish to golden brown russet skin with reddish highlights.  Creamy yellow flesh is aromatic, crisp and sweet.  Fruit picked early is somewhat sharp and acidic, but mellows after a few weeks off the tree.  Ripens after Red Delicious, about with Golden Delicious.  Keeps 3-4 months.  Used for dessert, cider and sauce.

Dabinett | Late October
A classic English hard cider apple variety, which produces a full bittersweet juice.  Unlike many hard cider varieties which are best-used for blended ciders, Dabinett can also be used to produce a single-varietal full-bodied medium-dry cider.  Note that Dabinett apples are not suitable for eating fresh, they can only be used for producing juice for hard cider.

Golden Hornet | Late October
The fruits are useful in the kitchen, for crab-apple jelly and a source of pectin for jam-making.

Harry Masters Jersey | Late October
Harry Masters Jersey is a traditional English cider apple variety, producing a bittersweet juice.  It comes from the county of Somerset, and was in use in the early 20th century. It is possibly a seedling of Yarlington Mill.

Malus Sieversii | October
In the 1990s researchers from the New York State Agriculture Experiment Station (NYSAES) at Geneva, NY, visited the fruiting forests of Kazakhstan in central Asia – believed by many to be the birthplace of the apple. They brought back numerous seedlings of wild Malus sieversii, the species which is now known to be the ancestor of all modern apples (Malus domestica).

Roxbury Russet | Mid October
Roxbury Russet is a typical russet apple, with a sweet flavor. However it is larger than most russet apples. The extent of russeting can vary from considerable to minimal, and like many russets it can develop an attractive sun-kissed flush as well.  It has many uses from eating fresh to sweet and savoury salads, juicing and cider.

Michelin | Mid October
Michelin is a traditional French hard cider apple variety producing a medium bittersweet juice.  Cider apple varieties tend to remain in use primarily in their area of origin but Michelin was imported to England in the 19th century and is arguably better known and more widely grown in England than in France.

Wickson Crab | Mid October
Wickson Crab apples contain plenty of pectin and are therefore useful in the kitchen for jams and jellies.  Unusually for a crab apple, Wickson Crab is also surprisingly sweet. The high sugar content is balanced by a high acid content, and the juice of Wickson Crab is therefore very useful in cider blends.

Golden Russet | Mid October
Golden Russet is usually considered to have the best flavor of all American russet apples.  It is an exceptionally versatile apple and was grown in New England on a commercial basis in the 19th century. Today it retains a keen following for the excellent quality of its juice, which is used for cider and hard cider production.

Hyslop Crab | Mid October
Hyslop, sometimes spelt Hislop Crab is a crab apple from 19th century America. This crab is unusually large for a crabapple, around 2″ in diameter with dark red to purple skin. Flesh is yellow, dry, firm, and tart. Used to add tannin and sharpness to ciders. Can also be used for jelly and pickling.

Pomme Gris | Mid September
This heirloom is small but dense, with thick, tough skin, with tan-green russeting covering the whole fruit. A solid fresh eating apple, usefullness in cider is debated. Like other russets, its high flavor has a tart sweetness and pear-like richness. Flavor is rich, dense, cruncy, with deep nuttiness.Excellent dessert apple. Grown by Thomas Jefferson in Monticelllo, where it places highly in the annual apple tastings. 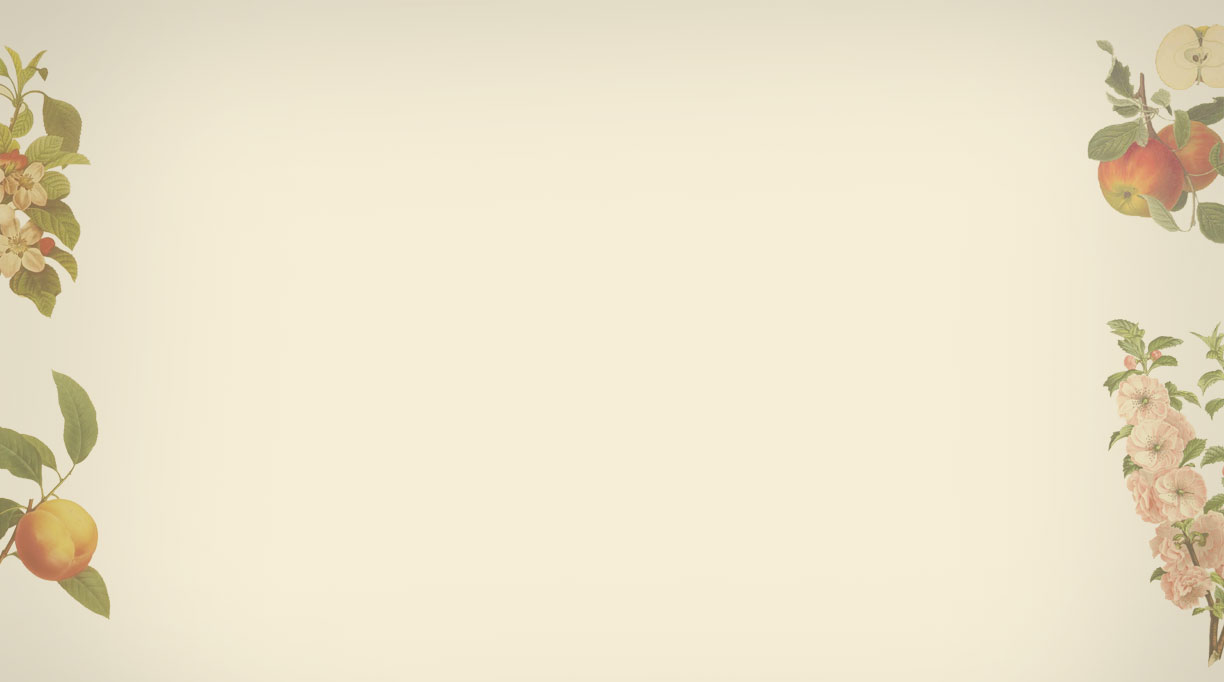